College of Charleston identifies contaminants from plastic pollution in bay

Researchers investigate PFAS levels in Sarasota Bay dolphins, who like humans, eat fish contaminated by plastic. Here's how their NIEHS project is progressing.

In a nondescript room in the recesses of the Willard A. Silcox Physical Education and Health Center, four students sit around a lab table dissecting small fish. Though it’s not immediately evident, they’re engaged in work that will lead to new insights regarding the dangers of plastic pollution. And those dangers don’t solely pertain to these fish or the dolphins that eat them. They also directly threaten human health.

“That’s really the underlying goal of this research,” says Leslie Hart ’03 (M.E.S.) as she directs her student team. “We’re trying to use this work to identify and raise awareness about the dangers of plastic pollution, not just because of its proven impact on wildlife, but because it can lead to complex issues for humans as well.”

Hart, who co-directs and teaches in the College’s public health program in the School of Health Sciences, has been studying dolphins since 2000 when she was an undergraduate student. After completing a master’s in marine biology at the College, she went on to earn a doctorate in epidemiology, specializing in skin disease in bottlenose dolphins.

For the work she’s currently doing – funded in part by a $400,000-plus grant from the National Institutes of Environmental Health Sciences – she has assembled a unique team. Two of the students working with her are undergraduates; and the other two include a master’s candidate in marine biology and a Ph.D. candidate in environmental health sciences at the University of South Carolina.

At the moment, Hart and her team are dissecting these fish so that they can process their tissues to determine what kind of plastic particles the fish are carrying. These fish, delivered recently from Sarasota, Florida, are regularly eaten by the dolphins in that area, the same ones that Hart has been studying for over two decades.

“We recently published a paper where we were the first researchers to look at samples collected from live dolphins,” Hart says. “We suspected that they ingest plastics based on the phthalate metabolites that we detected in their urine. Phthalates are manmade chemical compounds that are used in the production of plastics, solvents and personal-care products. They’re not chemically bound to the products they’re added to, so when plastics break down in the environment, phthalates are easily released. Our study of the stomach contents of live dolphins revealed microplastics, so that leads us to the fish that they’re eating.”

For the students involved in this project, this work has far-reaching ramifications.

“There’s a benefit to using dolphins for this because they’re a charismatic mammal. Who doesn’t care about dolphins, right? But more importantly, we know that plastics shouldn’t be in the marine environment, and phthalates shouldn’t be found there either, yet we’re finding them,” says Miranda Dziobak, the Ph.D. candidate. “And we know that some of the fish that dolphins are eating are fish that humans also eat, so there’s a seafood safety aspect to this issue as well. What we’re finding – plastic and phthalate exposure in dolphins – means that humans are probably exposed in a similar way. And phthalates pose the risk of endocrine disruption, which changes the way our hormones are produced and function and that can affect development, reproduction and cognitive abilities. There are many potential impacts.” 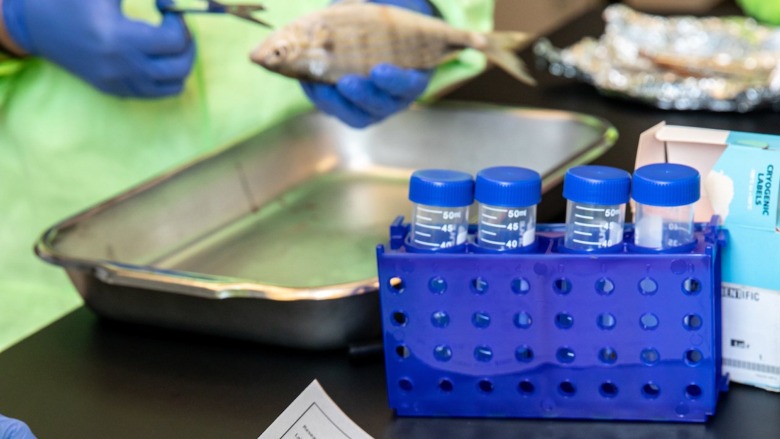 Data collected from fish taken from Sarasota Bay helps identify contaminants from plastic pollution getting into the food chain.

Maggie Knight, the master’s candidate, concurs: “I’m interested in how different environmental factors can change the chemistry of things, and how that potentially impacts both humans and animals. In particular, I’m interested in combining chemistry at a very, very small scale and the study of large marine mammals to make the world a better place for people, the oceans and the species that reside within them. Ultimately, this study is addressing that and plastic pollution, so it’s really worthwhile work.”

Fellow teammate Tita Curtain, a public health major, is also interested in how environments impact human health. That’s something she’d like to explore in the future with the background of a medical degree.

“What we’re working on goes way beyond the scope of dolphins and fish,” she says. “This is very much about us and our health. It involves seafood safety, yes, but also endocrine disruption. What we see in dolphins is likely parallel to what’s happening with us. So, this goes far beyond just what you see in this lab.”

And Eric Conger, another member of this team who is a marine biology major in the Honors College, says he’s grateful for such a meaningful experience as an undergraduate student.

“In most labs,” he explains, “you’re being trained to do something that doesn’t feel important until some time in the future. With this project, I feel like everything I’m doing, all the dissections, is actually contributing to something in the present.”

And that raises the question of where this research might lead. Hart is clear that this work currently pertains to what’s happening in a single geographic area – Sarasota Bay. Yet that doesn’t mean there isn’t room for expansion.

“Right now,” she says, “we’re focused on Sarasota Bay dolphins, but the potential exists for us to work with colleagues all over the world and sample different marine mammal populations. Doing that will enable us to look at the degree of contamination on a global basis, which will help us predict the risk of seafood safety issues for different coastal populations. And that would certainly make an important impact.”

The RemTEC & Emerging Contaminants Summit delivers a truly unique platform focused on advancing the environmental science and remediation industry. It is the place where you can hear essential sources of information on technology, application and policy affecting contaminated site restoration field from the world's leading experts within the academic, regulatory and environmental-consulting communities.