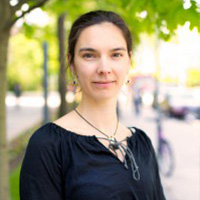 Elodie Passeport is an Associate Professor at the University of Toronto, and Tier II Canada Research Chair in Environmental Engineering and Stable Isotopes. Passeport is cross-appointed in the departments of Civil and Mineral Engineering, and Chemical Engineering and Applied Chemistry. Passeport obtained her PhD from AgroParisTech in France in 2010 for which she received the PHYTOPHARMA industry-sponsored (BAYER) Award for best Ph.D. Thesis. Passeport was a post-doctoral fellow in the Plant and Microbial Biology department at the University of California, Berkeley (2011-2012) and then in the Earth Sciences department at the University of Toronto (2012-2014). Her research group studies the fate and removal of contaminants from water, in natural and engineered environments, such as groundwater, bioretention cells, and constructed wetlands. Her research is experimental and involves laboratory and field studies, and the development of analytical methods to determine concentrations and stable isotope signatures of organic contaminants. More recently, Passeport is investigating the distribution of microplastic contamination in urban stormwater runoff as well as the potential of bioretention cell for the mitigation of microplastic contamination. In 2018, Passeport received the Bill Burgess Teacher of the Year Award for Large Classes, from the Department of Chemical Engineering & Applied Chemistry at the University of Toronto, and in 2020 she received the Early Career Teaching Award from the Faculty of Applied Science and Engineering.

Urban stormwater carries many contaminants that can threaten the health of receiving ecosystems, including non-regulated trace organic chemicals and microplastics. Bioretention cells are a type of urban green infrastructure designed to intercept and treat stormwater runoff. In this presentation, we will describe the role of bioretention cells for the physical retention of microplastics and the adsorption and plant- and microbe-mediated transformation of benzotriazole (anti-corrosive). We found significant decreases in microplastics concentrations in the 106-5000 µm range and similarities with the transport and retention of suspended solids. We showed that benzotriazole adsorbs the most under cold climate conditions, i.e. low temperature and in the presence of salt, a common co-contaminant. Our field data demonstrated that benzotriazole can also undergo some – though limited - very fast phytotransformation (during runoff event) and microbial transformation (between runoff events). Altogether, these results showed significant promise of bioretention cells to control emerging urban stormwater pollution.

Back to Platform Presenters Page